RoHS Compliance - What Does That Mean and Why Is It Important?
March 19th, 2014 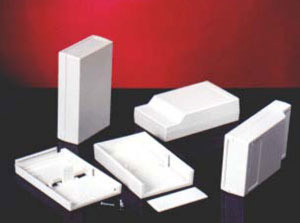 All the companies that sell electronic and electrical goods within the European Union are bound by law to abide the EU legislation pertaining to electrical and electronic equipment, or EEE for short. This legislation includes two parts: the WEEE or Waste Electrical and Electronic Equipment directive and the RoHS or the Restriction of Hazardous Substances directive. The first directive describes the responsibilities, both financial and other, of the producers of EEE with regards to waste collection and waste recycling, whereas the second one prohibits the use of a number of hazardous substances in EEE.

So, if your company sells any type of electrical or electronic goods in the EU, you are bound to come across the term RoHS compliance. All the EEE sold on the EU market, including their electronic enclosures, should comply with the RoHS directive. Thus, regardless of whether you intend to expand your business to this market or you want to operate solely in the EU, not only your electronics, but their plastic enclosures too should comply with this standard. Let’s examine in further detail what the RoHS directive includes and a few frequently asked questions regarding this regulation.

RoHS and Its Restrictions

The EU started working on the RoHS or Restriction of Hazardous Substances Directive in 2003, but it took effect on July 1st, 2006. Each of the member states of the EU was obliged to include this directive in its legislation. In effect, RoHS bans the use of six substances in the manufacturing process of a wide range of electrical and electronic equipment, components and related elements. These substances are considered hazardous not only for the human health, but for the environment as well. As already mentioned, this directive is closely connected to the WEEE directive, which governs the waste disposal and recycling in the EU.

The RoHS is sometimes called the “lead-free directive”, which is an incorrect label, as lead is just one of the six substances restricted by this regulation. The other five materials are mercury, cadmium, hexavalent chromium, polybrominated diphenyl ether and polybrominated biphenyl. Prior to 2006, these were used as flame retardants in a number of EEE. RoHS concerns all new EEE produced after July 1st, 2006. This includes the electronic enclosures as well, so when you are selecting a company to manufacture the plastic enclosures for your goods, make sure their products are RoHS compliant.

Manufacturers of EEE often have questions about what RoHS regulates in particular and about the ways in which this directive is applied. Here are the answers to a few of the more frequently posed queries.

There is no standard marking or obligation to display the RoHS compliance on your products, but it is advisable to mark this compliance anyway because that will make it easier for you to export/import the products and offer them on the EU market. However, the WEEE directive has a symbol which must be used to indicate compliance with it – the “crossed-out wheeled bin”. For the UK market, the producers of electronic and electrical equipment are required to produce a certificate for RoHS compliance in order to be able to sell their goods within the UK. These certificates do not expire and there is no particular obligatory or prescribed format for them.

The answer to this question is “no” and “yes” at the same time. In case the packaging is discarded after the customer purchases the product, then it is not considered to be a component of the EEE, thus it is not subjected to the regulations of the RoHS. But in case the packaging may stay with or forms part of your product and may be disposed of together with the EEE, it is subjected to evaluation on a case-by-case principle. In many of the cases, for instance for most electronic enclosures, the packaging should be RoHS compliant as well. As a manufacturer of EEE, you should know your product and its packaging well, in order to know what to declare and what not when distributing it on the EU markets.

The answer to this one is a definite “no”. Each electronic or electrical equipment or item that falls into the scope of the RoHS and is offered on the EU market, starting from July 1st, 2006, must comply with the RoHS directive, regardless of whether its product line existed before that date or not. There are no grandfather clauses of any kind regarding the RoHS.

As you can see, in case you want to sell your EEE in the EU, their components, including the electronic enclosures, should comply with the RoHS directive. In addition to that, they should also follow the REACH or Registration, Evaluation, Authorization and Restriction of Chemicals directive as well, which governs the production and use of chemical substances in the EU, as well as their potential impact on human health and the environment. There is complex legislation pertaining to the EEE in the EU, but it is developed with a thought of the health of the people and protecting the environment.