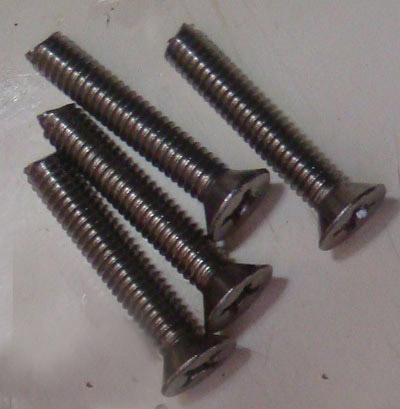 Plastite® screws are a special type of fasteners which are designed specifically to be used in plastics. Their design facilitates the thread-forming in plastics that are less compressible in nature. Plastite® screws are commonly used for electronic enclosures made out of ABS plastic as they provide higher resistance to pull-out and strip-out and can hold the enclosures together without the threat of opening.

The Plastite® 45° screw type in particular is very useful as it has a smaller root and a bigger diameter than the Plastite® 48° fastener type thus it can be implemented in bosses with smaller sizes too. The Plastite® thread-forming fasteners are available in various sizes and head styles. The head design can be a hex washer, a pan screw head, flat and any other internal or external head design. They can also use different screw drive systems.

Plastite® screws are mainly used in engineering-grade thermoplastics which have a bending modulus of over 850 000 pounds per square inch. They are made of carbon steel or stainless steel and can have different coatings and finishes applied to them.

The Main Advantages and Features of Plastite® Screws

Their three thread-forming lobes have full thread relief and require less driving effort. This also allows the displaced material to be pushed back into the relief areas, thus minimizing the radial stress exerted on the plastic and reducing the possibility of failure of the bosses. The Plastite® screws require lower levels of drive torque when securing stiffer thermoplastics.

Thanks to their three-lobe design, the Plastite® screws can fully take advantage of the cold flow properties of many different types of plastics and allow the plastic material to fill in the space between the lobes, thus improving the resistance of the screws to vibrational loosening. Furthermore, the deep and coarsely spaced threads of the screws make for a deeper engagement of the thread in the material and a heavier shear stress area, which enhances the holding power of the screws even further. This increases the overall product reliability of the plastic electronic enclosures, in which the Plastite® screws are used.

The three-lobe design of the Plastite® screws brings along another benefit. It reduces the circumferential stress and the root interference friction on the bosses, which are very dangerous as they can often cause bosses with thinner walls to burst. The reduced stress on the bosses in turn increases the strip-out resistance of the mechanical connection.

Thanks to the Plastite® thread-rolling screws’ improved driving capabilities, the costs and time necessary for their assembly are cut significantly. Their extraordinary holding power also eliminates any need for additional costly lock washers and inserts.

The Plastite® screws burnish the plastic they are driven into smoothly thus eliminating the inherent dangers of the implementation of thread-cutting screws. These screws create internal threads of high quality and cause no damage to the plastic’s molecular structure, thus the chance for material failure is reduced significantly.

The Plastite® screws have an exceptionally high drive-to-strip ratio which permits the safe use of a wider range of torque settings for automatic drivers. This way, the chances for any strip-out are virtually eliminated.

As you can see, Plastite® screws have many positive sides which make them ideal for use in a wide range of plastic electronic enclosures. They create a stronger connection and hold the enclosures together more securely.